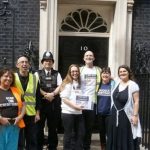 Olga Raffa has been asked to be part of the activist team attending the Paris Climate Conference in July. She has been campaigning to advance the UN moratorium with the banning and cessation of climate engineering…..that occur without the permission nor consent of the majority of the wider general public since 2012  via “The Directive to Ban Geoengineering and Aerial Aerosol Spraying.”

To take this issue further  she now needs vital funding to attend the International Scientific Conference “Our Common Future Under Climate Change” in Paris, France July 7-10, 2015.  “The Conference will address key issues concerning climate change in the broader context of global change. It will offer an opportunity to discuss solutions for both mitigation and adaptation issues.”

Climate engineers have admitted that at least 100,000 will die if a Global Solar Radiation Management programme is deployed. If no one opposes these operations, it is as good as a  green  light for them to proceed without hindrance. Ref: http://tv.naturalnews.com/v.asp?v=22f8364773afef6d82a907dbf1526d3e

This conference is a runner-up to what will be an historic UN 2015 Climate Agreement in Paris in December. She will be in attendance with Alexandra May Hunter an environmental law specialist from Arizona US ,  Max Bliss from France and other key activists opposing these proposals in plain sight.

Bridging the global problem we face, Olga will be  preparing for a concerted campaign to take this issue to UK and EU Parliament to outlaw this type of Climate Intervention which could  otherwise go through uncontested.

Having helped the general public successfully outreach to over 450 MP’s, that’s 70% of local UK Members of Parliament  to demand 6 points of implementation and  investigation to end climate changing aerosol emissions into  our atmosphere, she now needs your help.

She has delayed her decision to go because of lack of funds.  Time is running out as it all gets more expensive closer to the date! Early bird rates end May 19th.

Your gratefully received financial contribution will enable  her to represent civil society and your voice of  NON CONSENT, advise that the public’s permission has not been sought nor given and to advance the halting of these  crimes against humanity.

In  gratitude.
Many thanks for your help!