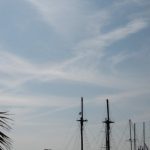 GREEN PARTY members called on the public to join them at an event to raise awareness of chemtrail and geo- engineering phenomena, which they say is happening in the skies over Cyprus. 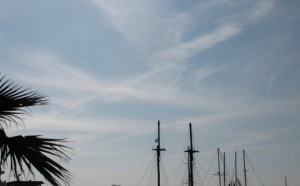 Chemtrails are said to be different from contrails, the trail that aircrafts leave in their wake

A peaceful protest was held on Saturday 15th of Feb 2014 at the entrance to Paphos harbour from 11am and  featured a Skype link-up with Greek activists who  demonstrated at the same time at Syntagma Square in Athens. Other demonstrations were scheduled to take place simultaneously around the world especially in Australia.

“After pressure from chemtrail activists in Cyprus samples were eventually taken from the air at high altitudes by the government and the skies subsequently given the all clear. But the Green Party is questioning these results, according to member and Peyia councillor Linda Leblanc.

“We received analysis results from the ministry of agriculture but we are dissatisfied. We had no input or control over what was tested and when or how it was tested. In addition, we are talking about nanotechnology, so equipment used for testing needs to be specialised and able to detect tiny amounts of a substance,” she said.

Leblanc said that the reply sent to her by the forestry department, which was responsible for the tests, was “very vague”.

“When we saw chemtrails, we were supposed to contact the forestry department and we did so; but they made excuses. They couldn’t test on certain days and so on, so we don’t know how or when they eventually did it.”

Leblanc said she was informed that the results were clear with ‘no sign of anything unusual’ but says what substances the department tested for remains unclear, as the information hasn’t been made available.

The term chemtrail is derived from “chemical trail” just as contrail is an abbreviation for the condensation trail left by commercial aircraft. Chemtrail spraying does not refer to usual forms of aerial spraying such as crop dusting, cloud seeding or aerial firefighting. The trail is also criss-cross rather than straight as in cases of flight paths.

Chemtrails refer to aerial trails allegedly caused by the systematic high-altitude release of chemical substances not found in ordinary contrails, resulting in the appearance of supposedly uncharacteristic sky tracks.

Supporters of the theory speculate that the purpose of the chemical release may be for global dimming, population control, weather manipulation, communication or biological warfare or chemical warfare and claim that these trails are causing a raft of health problem

Detractors though – including the British bases, which have been accused of being the culprits in the past – say the trails are merely condensation trails or contrails which form when exhaust gases from passing passenger jet engines combine with very cold, humid air at high altitude.

Leblanc said she first examined the subject ten years ago as she is concerned about the environment and pollution, health implications and quality of life.

Initially, she was skeptical but says as she educated herself and examined evidence from international researchers, she became convinced that something untoward was occurring in the skies.

“The contrails of an airplane usually dissipate but these are persistent chemtrails loaded with metallic oxides as they are seeding the sky at about 8,000-10,000 feet. These particulates are to deflect the suns radiation,” she said.

According to Leblanc, the Green Party is looking at the possibility of an independent analysis of the air, soil and water in Cyprus, which when conducted in other countries have shown high levels of aluminium, she says.

“It’s not our government doing this. Some years ago at a parliamentary committee meeting the civil aviation authority said they didn’t know who was flying outside the usual air traffic corridor around Cyprus, so this raises the question of safety as well.”

One of the main theories is that the chemtrails are concerned with weather manipulation, another is as military weapons.

Leblanc said; “There is a drought now and there are no obvious chemtrails but if you look at the sky it isn’t a clear blue, it’s hazy. A milky cloudy substance has been introduced to the high atmosphere. One theory is to prevent global warming getting any worse.”

The councillor says that although she has no firm opinion about what exactly is going on in the skies or its purpose, she is convinced that more information on the phenomena needs to be made available. In addition, she has been informed by numerous alternative therapists in Cyprus that they are treating increasing numbers of patients with eye and skin problems, as well as mushrooming numbers of asthma sufferers and those coping with memory deterioration.

Dr Natasa Mala Drapela, a qualified General Practitioner is based in Paphos; she also specialises in alternative therapies. She has noticed a marked increase in the numbers of people with these types of problems.

“I have been working in Paphos for 20 years and the number of inexplicable illnesses, including chronic illness which patients present with, is increasing,” she said.

The doctor has treated hundreds such cases over two decades and says they can be put down to certain factors, including changes in the environment.

“We have noticed illnesses such as asthma, skin problems and memory loss in increasing numbers over the last two decades and the reason for many of these can’t be explained. They can be very difficult to cure and they can be caused by a number of issues, including the environment around us, such as the air.”

Leblanc says that Saturday’s demo event would be an opportunity for the public to learn more about this issue and noted that information in both Greek and English would be available.
“We will also be available to answer any questions people may have. This is a very complex issue and people need to have information about what is happening in our skies.” ”

By Bejay Browne: Reposted from Cyprus-Mail.com