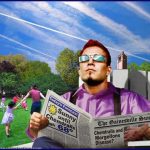 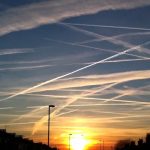 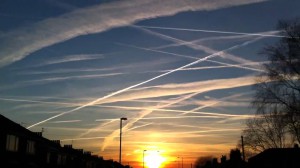 A deliberate major source of cancerous air pollution.
Geoengineering to save us from ourselves?

“Pollution in the air we breathe is a leading environmental cause of cancer, the World Health Organisation has said.”

Believe it or not, this is the opening line in an Independent article about the fact that air pollution causes cancer. I wonder how many geniuses it took to come to this conclusion and how much it cost us all to pay them for their ‘expert’ opinions or findings?

In a blatant attempt to further blame the motorist, an image of a smoking exhaust from a car, or a cavalcade of fuming motorcycles is used to reinforce the perception that all forms of motor vehicles are bad and drivers are causing ‘global warming’ etc… Diesel powered vehicles, mainly trucks I would suggest, are cited as a major problem.

The International Agency for Research on Cancer states that – “It has already classified many chemicals and mixtures that can be components of air pollution, including diesel engine exhaust, solvents, metals and dusts. But this is the first time that experts have classified air pollution as a cause of cancer.

This is of course falling in line with the UN’s Agenda 21, which states that there will be no private transport in the future and thus there is a need to stigmatise drivers and motor vehicles in the same way that cigarettes have been stigmatized.

So it comes as no surprise that air pollution is put in the same bracket as cigarette smoking and in particular is clearly associated with industrialisation.

I’m not suggesting at all that the factors above don’t in some way, although undefined or quantified in the Independent article, impact the air we breathe.

However, what is clearly a deliberate ‘error’ by omission is the link between the only source of pollution in the air and the only object that uses carbon based fuel and actually travels through the air, namely aircraft.

Why are aircraft not included in the list of culprits?

In my opinion, the reason that aircraft are not included is because perhaps people would then take more of an interest in what’s going on above their heads and see the vast amounts of chemicals being deliberately sprayed into the atmosphere, as yet denied by our politicians, to apparently alleviate the causes of ‘global warming’ which simply is not happening.

Now whether you believe in the theory of man-made global warming or not, can I suggest that a little bit of warming is a far lesser risk to human, animal and plant life on the planet than the deliberate spraying of chemicals on the public without their consent; a cocktail of toxins which undoubtedly cause a variety of cancers and other diseases such as Alzheimer’s and Dementia to name but two.

There is ample evidence available to show that this is happening. People only have to look up into the air and see the lines in the sky, which spread and eventually create voluminous haze thereby blocking out sunlight.

Vitamin D deficiency is now an increasing scourge, not only in the UK but also worldwide, due to lack of uptake of this vitamin, which is essential for the immune system. Is it any wonder that people appear to be sicker these days and thus filling the coffers of Big Pharma?

Rickets has now re-emerged as a major illness in children in the UK for the first time since the 19th century.

As mentioned above, air pollution is no doubt happening but as technology improves to the degree that pollution can be mitigated, almost to the point of zero, by methods which would be far simpler than solving the dubious theory of manmade global warming, using geoengineering methodology which is poisoning our air, land sea and all life on the planet.

Even if Earth was to warm, the solution to that cannot be to conduct a medical experiment on the planet ‘just in case’.